The Roman Catholic Diocese of Pilsen is the second youngest diocese in the Czech republic. It was founded on May 31, 1993, by Pope John Paul II. Its area takes up most of the Pilsen Region, the Region of Karlovy Vary and also includes several municipalities of the Usti Region and the Central Bohemia Region. 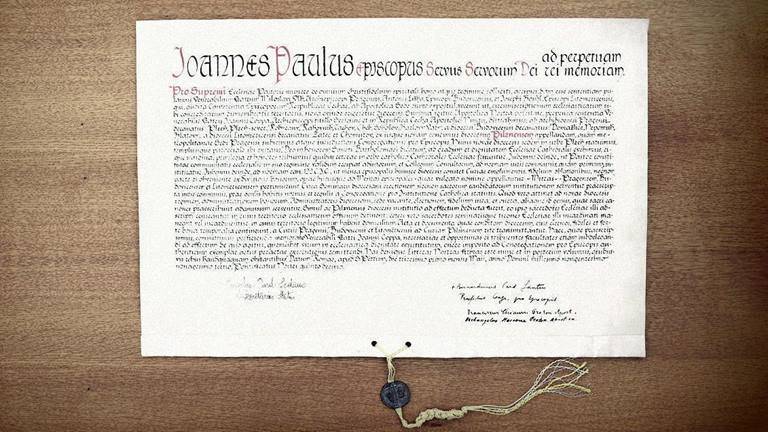 It was first led by Msgr. František Radkovský who, after almost 23 years, was succeeded by Msgr. Tomáš Holub. The latter’s ordination on April 30, 2016 was historically the first one the Diocese has witnessed.

The patron saint of the Diocese of Pilsen is Blessed Hroznata, a West Bohemian aristocrat and knight who lived at the turn of the 12th and 13th centuries. His grave can be found in the church of the Abbey of Tepl. In September 2004, the process of his canonisation began.

Every year there are a number of traditional events to look forward to. They offer a unique opportunity to meet people from all over the Diocese, to meet Bishop Tomáš or Bishop Emeritus František in person, and to find encouragement and to reinvigorate one’s spiritual life. The list of the upcoming events can be found in the Events Calendar section.

The Ball of the Salesian Centre in Pilsen

A great occasion for members and supporters of the Salesian family to meet informally outside their busy work schedules. Its popularity has spread all over the Diocese and people come to enjoy music, dancing, the tombola and a variety of performances. The ball takes place at the turn of January and February in the Peklo House of Culture in Pilsen. Among the ball’s regular guests are the two bishops, Tomáš and František. For more information visit www.sdbplzen.cz.

In cooperation with several other institutions and authorities (the City of Pilsen, the Union of Fine Arts of Pilsen, the Centre of  West-Bohemian Authors, the Conservatoire of Pilsen, the Museum of West Bohemia), the Diocese of Pilsen organizes this unique festival which combines the beauty of art with the message of faith. Its program, comprised of exhibitions, concerts, author readings, lectures and discussions, extends over the whole year with a particular topic every year.

The turn of May and June is marked by the traditional Night of Churches which takes place all over the Czech Republic. The Diocese of Pilsen was among the first places to hold this special event. In the regions of Pilsen and Karlovy Vary, about 150 churches, chapels and prayer rooms of 9 Christian churches open to the public. Attendance at the event exceeds 35,000.  Visitors can choose from activities that range from just sitting inside enjoying the atmosphere of the place, lighting a candle or enjoying arts and crafts workshops, activities for children and exhibitions of liturgical objects and vestments, to performances by musicians and singers. The Hidden Spaces of Pilsen

This popular attraction is regularly organized by the 700 Years of the City of Pilsen Foundation. Its goal is to open and introduce the otherwise inaccessible spaces between the houses of the historic centre. The Diocese of Pilsen takes part in the event by opening its offices at Náměstí Republiky 35. The visitors can enjoy free entry to its backyard and the Chapel of Blessed Hroznata as well as a guided tour led by the architect Jan Soukup. Also on offer are competitions, concerts and an exhibition about the history of the Diocese.

Young people go out on to the streets to invite passers-by to stop in the middle of their busy schedule. The Church of the Assumption of the Blessed Virgin Mary is open to them and here they can rest for a while, pray, light a candle and listen to church music. The people behind this event belong to the Missionary Oblates of Mary Immaculate from Plasy. It is organized twice a year – at the turn of May and June and in December before Christmas. The Day of the Madonna of Pilsen

This is the day on which the foundation of the Diocese of Pilsen is commemorated. Bishop Tomáš Holub celebrates Mass in St.Bartholomew’s Cathedral to which city and regional representatives are invited. With the attention focused on Virgin Mary – the Madonna of Pilsen – it is an opportunity to give thanks for the friendship and support offered to the Diocese.

PilsAlive is a Christian music festival organized by the Diocese of Pilsen in cooperation with the Friends of Coinonia Association. It offers the audience a type of Christian music different from traditional temple music. It takes place at the beginning of June at the premises of the Diocesan offices.

The Square of Fairy Tales

On the last day of the school year the main square in Pilsen turns into a giant playground. Children take part in workshops and carry out different tasks set for them by fairy tale characters. Other attractions typically include a bouncy castle, slides and a fire engine. The event is organized by the Diocese of Pilsen in cooperation with the Friends of Coinonia Association. The Organ Festival of Pilsen

The Organ Festival of Pilsen is regularly organized by the charitable trust Ars Christiana in cooperation with the Diocese of Pilsen. It offers organ concerts and an exhibition about pipe organs. The event begins in spring.

The name of the event is an acronym for “a great summer get-together”. Young people from 14 to 18 spend a week in summer at a parish house in Nečtiny during which they play games and sports, share their faith and gain new experiences of meeting God.

This has become one of the most popular summer activities for young people, not only among the youth from our Diocese.  Around 70 participants from all over the Czech Republic and Germany meet in Manětín, a town north of Pilsen, where they offer their time and skills for free to help local people in need, such as families, the elderly, widows or the sick. Anyone who asks for help can have wood chopped, lawns mowed, fences painted, the house cleaned, furniture moved, windows cleaned or rooms painted. Workship is organized by the Missionary Oblates of Mary Immaculate from Plasy.

This is a traditional September event with a regular turnout of about 1000 participants. It takes place in the Abbey of Tepl and its purpose is for the Diocese to meet. The pilgrims can take part in Mass celebrated by the bishop and in a variety of other activities ranging from concerts and lectures to programs (? can I use this word in this context? –YES!) for children and young people.

On the occasion of World Senior Citizens Day, the Diocese of Pilsen organizes a meeting of elderly people who come together to support each other, to learn something new and to reinvigorate their spiritual life. The all-day schedule includes prayer, lectures, discussion and Holy Mass.

Candles for our departed ones

On 2 November, All Souls’ Day, Bishop Tomáš invites all those who have lost a close person to come to St.Bartholomew’s Cathedral to light a candle for them and to give praise for the gift of life. People can also write down the names of their departed ones on a piece of paper. The community of the Nový Dvůr Abbey will then accept these and pray for all the people mentioned. The ball season in the Diocese of Pilsen is traditionally opened by a youth ball called Let´s Dance which takes place just before the start of  Advent. The combination of the music and dancing in the unique space of the Pilsner Urquell Brewery makes for a very special atmosphere indeed.

Advent in the Diocese opens with a variety of cultural and spiritual events, including musical performances. For example, each Advent Sunday offers 30-minute organ improvisation by leading Czech organ players. These concerts present an opportunity to stop in the middle of the pre-Christmas rush and to hear the message of Advent.

Details of upcoming events can be found in the Events Calendar section.